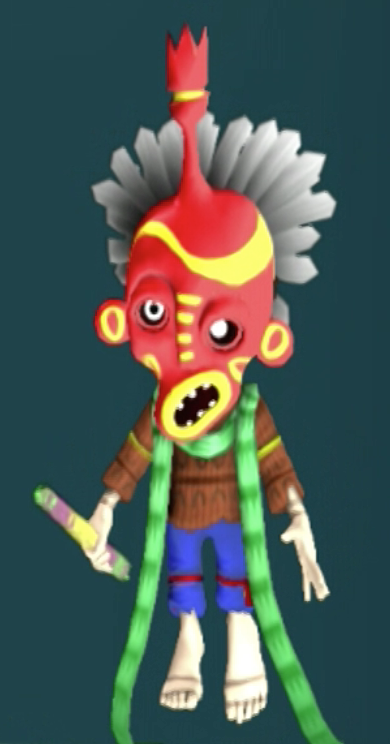 "There is a witch-doctor named Dastardos who puts sick Pinatas out of their misery with a big stick. When things go badly for an animal, they get sick. Dastardos has invented a cheerful song to help him through the day and make pinatas calm while he 'fixes' them..."

"The first child of Jardiniero and his wife, born with the name Stardos. He was taught by his father about how to raise a garden and to help out when a pinata is in need. Lester and Stardos were both learning the best ways to cultivate the land so that no pinata could resist. One day Jardiniero had caught a rumor that the Dragonache egg had been discovered on a far off island and Stardos was left in charge of the other three kids while his father was on an adventure. Stardos took the responsibility of the kids and sent his father and mother off from the docks. As soon as they left bad things began to happen. Lester had lured Stardos into his secret lair deep in the jungle, bragging about how he had made a new black and red candy. Stardos tried a piece. In the journal Jardiniero writes 'There is a new person hanging around the garden, named Dastardos. He's creepy, but he reminds me of someone I used to know...' giving us the insight that Dastardos is a corrupt Stardos."

When a resident Pinata gets sick, and you don't heal them quickly, Dastardos will come to your garden to break the pinata with his stick. Once Dastardos enters the garden, Doc Patchingo may not have enough time to heal your pinata. However, if you have a tamed Crowla or Sherbat in your garden, they can distract Dastardos long enough to hopefully buy enough time for Doc Patchingo to arrive and do his work.