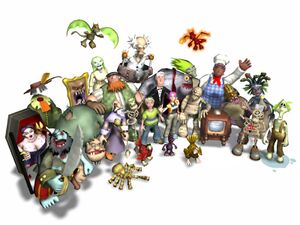 Group photo of every character and Ghouly

Ghoulies (singular: Ghouly or Ghoulie[1]) are a group of undead and supernatural creatures that appear in Grabbed by the Ghoulies. They are the residents of Ghoulhaven Hall, and are led by Baron Von Ghoul. Ghoulies consist of several breeds, such as zombies or mummies. Dr. Krackpot is the creator of the Ghoulies, whom he creates in his lab. Cooper encounters several Ghouly breeds on his journey, each of them having their own attributes and health. He can fight them using various attacks, including basic punches and kicks, hitting them with a Temporary Weapon or, in some rooms, using a Permanent Weapon.

Nearly every Ghouly except Skeletons cannot use Temporary Weapons. There are no Ghoulies that can use Super Soups. Weak Ghoulies such as Imps can take damage from any attack whereas Ghoulies such as Hunchback require a specific method to attack. A few Ghoulies can only be attacked by a Permanent Weapon, for example, Fire Imps only take damage from the Fire Extinguisher. The Reaper can kill any Ghouly that it touches. Whenever a Ghouly is defeated, it disintegrates into a light green shell and vanishes.

Some Ghoulies do not get along, and these ones are known as "traitors". This is first shown in Chapter 2, Scene 8: Lighthouse Living Quarters, where two Zombies get into a fight because one suspected the other of cheating in a game of cards. Traitors have a smiling face icon over their heads, and they prioritize attacking other Ghoulies. If only one traitor is left, its smiling face icon turns into a question mark, and it starts to come after Cooper.

There are three categories of Ghoulies: