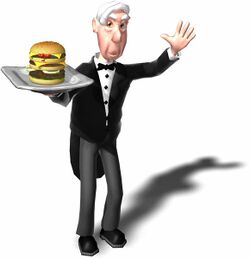 Crivens is the butler of Ghoulhaven Hall. Crivens acts as a guide for Cooper during his quest throughout the mansion, and teaches him about Ghoulies, basic actions, and challenge rules.

Crivens is an eldery man with brown eyes, white hair combed over the side and he wears a black tuxedo with black buttons, shoes, bow tie and grey pants. He also has a slight hunch and is slightly taller than Cooper.

Crivens first appears when Cooper first enters Ghoulhaven Hall looking for his girlfriend Amber. Entering into the Grand Hallway, wanting to know what the noise is that is disturbing his sleep, Crivens turns on the lights which reveals the presence of Imps, Frightened, he retreats back to the Trophy Room and leaves Cooper with the Imps, but helping him by lending him the Cook's Chair. After finishing the challenge, Crivens renters the Grand Hallway and greets himself to Cooper, giving him a map and taking back the chair. During Cooper's journey in the mansion, Crivens will come in and out, offering useful information and giving Cooper the Candle when coming across a Ancient Mummy. When Cooper reaches the Ye Old Archives and end of Chapter 1, Crivens unties Amber and reunites the two until Dr. Krackpot comes along and transforms Amber into a ghouly. Crivens then tells Cooper see the cook, Ma Soupswill and informs her about Cooper's visit.

At the start of Chapter 3: The Riddle when Cooper and Amber attempt to leave, Crivens gets Mr. Ribs to ask Cooper to see Crivens at his Quarters. Cooper agrees and finds Crivens hiding in a cupboard, away from a horde of Flying Imps. Cooper defeats them and Crivens exits the cupboard and convinces Cooper to go on another quest to find the three pieces of the riddle, a riddle that would open the door to the Baron's Quarters which has the key that would free the prisoners.

After Cooper collects the riddle and enters the Baron's Quarters he finds the Baron taking a beating from Crivens who has the key. Crivens then gives Cooper the key, but as he places on his hand he takes it away and bashes Cooper with it. Crivens removes his mask and reveals himself to be Baron von Ghoul, who states "you never guessed that the Butler did it".