Imps are the most common and basic Ghouly encountered in Grabbed by the Ghoulies. They are small, purple carnivorous creatures with two horns on their head, two fangs on their upper jaw, clawed hands and feet, a tail with a white, triangular end, a pot belly, and two red eyes. Imps are first encountered and fought in Grand Hallway (Chapter 1, Scene 1), making them the first Ghoulies whom Cooper encounters. They are also the last Ghouly encountered, at the Front Gate in Chapter 5, Scene 13.

Imps have only 5 Energy, making them one of the weakest enemies. Imps often appear in groups, and they only perform basic attacks, including kicking and scratching, which only does 1 Energy of damage. Because Imps have little Energy, Cooper can instantly defeat them by hitting them with a Temporary Weapon. Imps are one of the enemies that can be created by Haunted Televisions.

Imps have a few variants, including Fire Imps, Ninja Imps and Flying Imps. A minor character, Roger the Cabin Boy, is an Imp. His behavior is shared with regular Imps, but Roger can be distinguished from the matching red-and-white striped sailor shirt and hat that he wears. 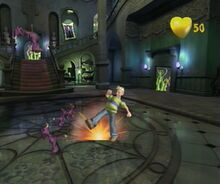 Cooper fighing some Imps in the Grand Hallway (Chapter 1, Scene 1).

At the start of the Chapter 1: The Rescue, as Cooper walks down the Grand Hallway, several glowing red eyes start to surround him in the dark. Cooper reacts by shouting in fear. Hearing the commotion, Crivens comes in to turn on the lights, revealing that the several pairs of red eyes are Imps. When gameplay starts, Crivens teaches Cooper how to fight Imps. Once Cooper has defeated every Imp, more of them enter the Grand Hallway, and Cooper has to complete a "Defeat All" Challenge. During this, Crivens teaches Cooper about Temporary Weapons, and he lends him Ma Soupswill's chair to fight off the rest of the Imps. After defeating them, Cooper can continue to the next room.

At the end of the game, when Cooper and Mr. Ribs escape to the Front Gate, an Imp knocks Cooper unconscious, and Mr. Ribs is decapitated by them. Just as the Imps are about to feast on them, Ma Soupswill arrives to fight off the Imps with her large wooden spoon.