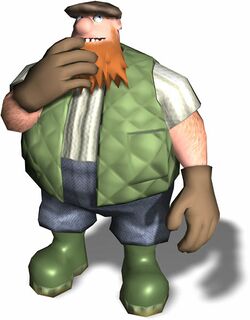 Fiddlesworth Dunfiddlin is the groundskeeper at Ghoulhaven Hall in Grabbed by the Ghoulies. He first appears in a storybook cutscene when Cooper first enters the Boathouse. A recurring gag is that Cooper always mispronounces his name, calling him "Fiddle-dee-dee," "Fiddlebutt," and "Fiddlesticks".

In Chapter 2, Cooper sets out to find three ingredients around Ghoulhaven Hall to give to the chef,Ma Soupswill, so she can make a cure for Amber.

Cooper encounters Fiddlesworth at the boathouse which leads to the Lighthouse that has the first ingrediant, glow worms. At first, Fiddlesworth startles Cooper with his tall stature but then introduces himself as the groundskeeper. He then lends Cooper his nephew Willy's water squirter to help him fight Zombies.

Cooper finds Fiddlesworth again in the Farmyard, being tormented by Roger the Cabin Boy. When Cooper defeats him, a horde of ghoulies come to attack. After the challenge, Fiddles worth lends Cooper his prized gun, Ol' Edna, which can defeat Vampires. Cooper uses this gun for the Vampire Chickens in the Chicken Shed which has the second ingredient, the Egg. When Cooper returns with Egg, Fiddlesworth collects Ol' Edna, but Mr. Ribs comes and snatches the Egg. Fiddlesworth, believing Ribs to be stealing, tells Cooper to chase after him.

In Chapter 3, Fiddlesworth assists Cooper again when he needs three riddle pieces to open the door to Baron's Quarters. In the Infirmary, Fiddlesworth meets Cooper while looking for Willy who has an eye infection. In that meeting, Fiddlesworth lends him the water squirter again that Cooper uses up until in Dunfiddlin's Cottage Garden, where Fiddlesworth recollects the water squirter and trades it for Ol' Edna for Cooper to use in the vampire-infested Greenhouse. Fiddlesworth then collects Ol' Edna after the Baron throws him out his Cottage for letting Cooper into the Potting Room. Cooper meets Fiddlesworth a little later in the Woodshed when he catches himself spying on a lone vampire. As Fiddlesworth abruptly leaves, Cooper helps himself to Ol' Edna before returning it at the Garbage Yard.

Fiddlesworth returns briefly in the Chapter 5 in the Conservatory after the challenge where he lends Cooper the water squirter which he collects in the Dinning Room. Fiddlesworth also goes to the Frontgate along with the other residents to say his farewells to Cooper.

Throughout the game, Fiddlesworth tends to start dialogue with 3-word sentences that refer to agriculture. In an interview with members of Rare Ltd. about the XBLA release of the game, it was revealed that these were referred to as "fiddlerisms".[citation needed] The fiddlerisms include:

Fiddlesworth is referred to as the "ginger-haired man" by Mr. Ribs, and could have a close relationship with Babs Buffbrass, since she admits that "lookin' after Fiddly is better than slavin' after the Baron...just!" which is somewhat out of character for her. She also states that he "keeps unmentionable things in 'is sock drawer," perhaps suggesting that he is a poor housekeeper.

He appears to speak with a strong West Country accent.