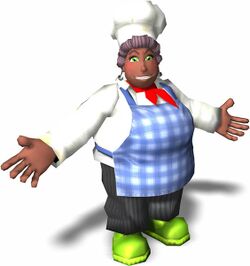 Ma Soupswill is the cook of Ghoulhaven Hall in Grabbed by the Ghoulies. She is first encountered and mainly seen in the Kitchen. She plays a major role in Chapter 2: The Restoration, in which she has Cooper help her brew a cure for Amber's affliction. Ma Soupswill is also a playable character in the very last scene, Chapter 5, Scene 13: Front Gate. Her assistant is Mr. Ribs. Ma Soupswill is also the creator of the Super Soups,which are found all over

There she makes her own Super Soups with the aid of her apprentice Mr. Ribs.

Ma Soupswill is an overweight Jamaican woman with purple hair and green eyes. She wears a white chef's hat, a white blouse, a blue apron, a red kerchief, earings in the form of tiny fry pans, grey pinstriped pants and bright green shoes.

In Chapter 2: The Restoration, Cooper visits Ma Soupwill per Crivens advice, as he searches to find a cure for Amber, who has been turned into a Ghouly. Instead, Cooper finds Ma Soupswill fighting a couple of Fire Imps that she cooked up. Cooper comes to her aid and she gives him the Fire Extinguisher to deal with them. After the confrontation, Ma Soupswill tells him to get three ingredients and bring them back to her so she can make a cure.

The first ingredient is glow worms that are are at the lighthouse, the second is an egg in the chicken shed and finally dungweed in the walled garden.

When Cooper gets the egg (with the help of Fiddlesworth and Ol' Edna), Mr. Ribs comes and snatches it from him. After chasing and beating him to a pulp back at the kitchen, Ma Soupswill intervenes and saves Mr. Ribs by informing Cooper that Mr. Ribs is her assistant. Cooper quickly helps Mr. Ribs up and continues his journey to find the Dungweed.

When Cooper returns with the dungweed, he again finds Ma Soupswill being attack by Fire Imps. He must defeat them again with the Fire Extinguisher but with only more Fire Imps and a time limit. After the challenge is complete, Ma Soupswill mixes the ingredients and gives Cooper the cure, only to later find out the pepper she added was bad (it had a red x to indicate alertness). The cure she gave him only made Amber into a bigger, hostile Ghouly and the two battle each other. Ma Soupswill comes just in time with the right cure (it has a green tick to indicate correctness) and Amber is turned back into to her human self.

Just before Cooper and Amber leaves, Cooper is requested by Crivens to confront the Baron and obtain his key which would free all the prisoners. The only way to enter his room is to a riddle which is split into three pieces that are scattered around the mansion. Ma Soupswill briefly assists Cooper by sending Mr. Ribs to lend him the Fire Extinguisher in the Stables which is infested with Fire Imps.

In Chapter 5: The Race, Ma Soupswill again aids Cooper with the Candle in the Relic Store and in the final scene of the game in the front gate where an unconscious Cooper and Mr. Ribs are helpless to a horde of Imps, she comes to the rescue as a playable character. When playing Ma Soupswill, she can use soup cans and has a large spoon that can take out several imps at once. When all imps are dead, Cooper wakes up and Ma Soupswill opens the gate for him to leave.