Jessie and Clydes are a breed of Ghoulies that appear in Grabbed by the Ghoulies. They are two monsters mashed together in one body; the left half is Jessie, a slender, light green female with grass-like hair, and the right half is Clyde, who is a large, muscular cyclops with light purple skin, an orange eye, large jaws, bulging veins, and a bald head. Jessie & Clydes have been specifically described as an unstable blend of a fairy and a cyclops.[1] Jessie & Clydes wear a dark red dress, which have rips and tears to fit them. Jessie & Clydes have 100 Energy, making them one of the strongest Ghoulies.

Before a Jessie & Clyde first takes notice of Cooper, Clyde is asleep (which is expressed by Z's) while Jessie happily frolics with a large flower in her hand. If Cooper gets too close, Clyde wakes up, eats Jessie's flower, and takes control over the body, causing Jessie to fall unconscious. Clyde has an opposite personality of Jessie, as he is violent and very short-tempered.

Clyde has two attacks: punching Cooper, which takes away 20 Energy, or performing a Scare, which takes away 5 Energy if Cooper is within the red zone. Furthermore, if Cooper gives into the Scare, Clyde picks up Cooper and throws him to another side of the room, taking away an additional 5 Energy. If Clyde successfully hits Cooper, both he and Jessie cheer happily for a few seconds. Like Medusas, whenever Jessie & Clydes are knocked back, they briefly turn red, making them invulnerable to all attacks. This also occurs if Clyde is angered, either from waking up or right before punching Cooper.

Jessie & Clydes do have a Challenge icon, although it is only seen during the "Number (Any Breed)" Challenge of Chapter 5, Scene 9: Walled Garden. 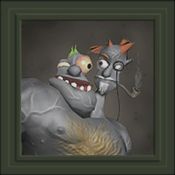