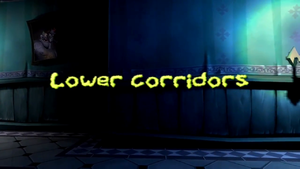 The Lower Corridors is a hallway on the lowest floor of Ghoulhaven Hall in Grabbed by the Ghoulies. It is located behind the Grand Hallway.

The Lower Corridors is separated into three sections, each blocked off by black jail bars, and Cooper visits these sections during various parts of his journey. During each visit, Cooper can witness an event take place behind the bars.

The middle section has two doors, which lead to the Scullery and Embassy Ballroom respectively. There is a large portrait of a Fire Imp in front of the entrance. As with the first section, there are vases, this time with varying sizes.

The right section has two doors, which lead to the Workshop and Pantry respectively.

When Cooper first visits the Lower Corridors, he is in the left section, and his Energy is changed to 15. It is the first scene with an Energy Boost! Super Soup. It is also the first scene to have two specific Ghoulies: a Scare Ghouly (a Telephone specifically) and Spiders. There are two Temporary Weapons: a painting, which is found in a corner just after the Telephone, and a small table, which is beneath the werewolf portrait.

Cooper must go down the Lower Corridors and go to the Cinema. He first has to pass the Haunted Telephone, which gives him a Scare. Crivens provides a brief explanation about Scares. He must then continue past two vases. If Cooper breaks the first vase, two Skeletons pop out. As Cooper approaches the second vase, a Spider breaks out of it. After the two vases, Cooper can go through the door on the left and continue into the Cinema. As he approaches the door, four Spiders break out of the third vase.

Just beyond the door to the Cinema, Cooper can see a Zombie and an Ancient Mummy dancing outside the Embassy Ballroom. There is also a Skeleton chasing a Zombie down the hallway. Lastly, Roger the Cabin Boy is seen standing on a wooden table.

After the Scullery, Cooper goes into a door and enters the middle section of the Lower Corridors. His Energy is dropped to 5. The only Ghoulies encountered are two Haunted Chairs. At the start, if Cooper goes to the right, he can see an obese man behind the jail bars blocking off the rightmost section. It shakes on the bars, implying that it is trying to escape. Cooper must continue left, past two Haunted Chairs and go right to enter the Embassy Ballroom.

Later, after Cooper's second visit to the Embassy Ballroom, he must re-enter the middle section of the Lower Corridors to go back to the Scullery. Like last time, his Energy is dropped to 5. The two Haunted Chairs are replaced with regular chairs, which can be used as Temporary Weapons. Cooper encounters six Ninja Imps, two in each of the three brown vases. As Cooper approaches one of these vases, the two Ninja Imps break out of it. Besides a difference with Ghoulies, this scene is very similar to Scene 3, except Cooper must down the hallway from the opposite end. The door to the Scullery is on the right. Like the left section of the Lower Corridors, the third vase from which an enemy breaks out of (in this case, Ninja Imps) is next to the door that Cooper must enter.

Like Chapter 2, Scene 3, the same obese man is still seen trying to escape from behind the bars.

This scene takes place in the rightmost section of the Lower Corridors. Cooper enters here from the Scullery. His Energy is changed to 10. The scene has the Challenge rule "Don't Get Hit", and is the first one to have it. As Cooper continues down the hallway, he encounters four Haunted Chairs. Cooper can pick up a pot at upper-left corner from the entrance, and then throw it at the Haunted Chairs up ahead to defeat them.

After this, Cooper must go left and continue down the hallway. There is a door on the left side and a window across from it, on the right side. If Cooper looks out the window, he can see a Hag, who tries to give him a Scare. A Grasping Hand is hiding in the floor, in front of the door to the Pantry. It grabs Cooper just as he is about to leave. By pressing the right button combination, Cooper can avoid a Super Scary Shock and continue to the Pantry.

The jail bars are at the dead end of the hallway, after the door to the Pantry. Behind the bars is a massive Spider who is about to eat an Imp that was caught in its spider web.

This scene takes place in the same leftmost section of the Lower Corridors as in Chapter 1, Scene 6. There are four Ghoulies in this scene: two Haunted Chairs and two Haunted Paintings, which Cooper encounters as he walks back down the straight hallway. The same Telephone tries to give Cooper a Scare as he approaches it. As with Chapter 2, Scene 25, there is a Grasping Hand in front of the door to the next room. It grabs Cooper just as he is about to leave. Cooper manages to avoid a Super Scary Shock, and he enters the door to the Grand Hallway.

Unlike the four previous visits, there is no unique event that occurs behind the bars.

This section is a stub. You can help Rare Wiki by expanding it.