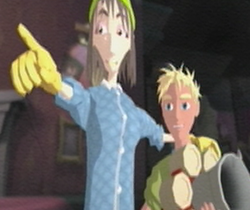 Barbara "Babs" Buffbrass is the cleaning lady of Ghoulhaven Hall in Grabbed by the Ghoulies. She first appears in a storybook cutscene when Cooper first enters the Music Room. She remains very hostile towards Cooper for destroying furniture and creating large messes around Ghoulhaven Hall, although there are a few occasions where she permits Cooper to use the Soda Pop Gun.

Cooper first encounters Babs Buffbrass in Chapter 2 while on the hunt for Dungweed in the Walled Garden. When finding the Soda Pop Gun in the Music Room, Cooper is subdued by Babs who pinches his ear as she believes him responsible for causing a mess with the Soda Pop Gun. After Cooper confirms that he wasn't the one using it, Babs tasks him with him taking the weapon and trashing it. She then delightfully points him the way to the Walled Garden. When Cooper returns to the Music Room after securing the Dungweed, Babs angrily recollects the Soda Pop Gun after seeing that Cooper hasn't thrown it to the trash like she asked and has made more of a mess with it.

Babs Buffrass returns again in Chapter 3 when she lends Cooper the Soda Pop Gun again at the behest of Crivens when he makes his way to the Attic. Babs then recollects it once more when Cooper reaches the Experiment Chamber, no longer caring what Crivens said.

In Chapter 5, Babs again lends Cooper the Soda Pop Gun in the Walled Garden as thanks for taking out the Baron, and takes it from him shortly after in the Cinema when she realizes she'll have to clean up after Fiddlesworth now the Baron is gone. Babs later says her farewells to Cooper and Amber in the Front Gate, now with a positive attitude as she decides that looking after Fiddlesworth would better than slaving for the Baron.

Babs is a grouchy, bitter woman who is always stressed at the amount of cleaning she has to do, likely due to all the property damage by the ghoulies. It is known that Babs' real name is Barbara, but she prefers Cooper to call her Ms. Buffbrass, while her friends call her Babs.

She appears to speak with a Cockney accent.