Amber is the girlfriend of Cooper and one of the main characters of Grabbed by the Ghoulies. She is featured during the first two chapters, Chapter 1: The Rescue, in which she is the damsel-in-distress, and Chapter 2: The Restoration, in which Cooper looks for a remedy for Amber after she was transformed into Ghoulie Amber. Her normal form does not appear in any of the main game's gameplay sections. Despite this, Amber is playable in four Bonus Challenges: Kick 'Em Quick!, Dirty Laundry!, Bedtime Gory!, and Play it again, Son!. Her physics and fighting mechanics are the same as Cooper's.

Amber has highlighted pink hair which is tied into a ponytail. Her fringe is split into two parts on each side of her head. Amber has olive green eyes and similarly highlighted pink eyebrows. She wears a black shirt with a grey stripe across her chest, a bright, orange-padded vest, light gray cargo pants, and light blue sneakers. She wears a pink wristwatch on her left arm.

Amber about to be kidnapped in the intro

In the opening sequence, Cooper and Amber are traveling down the countryside. She is frustrated at Cooper for reading the map incorrectly, resulting in them getting lost. They get wet from the rain, and Amber spots Ghoulhaven Hall and suggests they stay there until the rain stops. Cooper refuses and says that such places are filled with creeps. Baron von Ghoul overhears Cooper's comment and gets offended, so he has two of his minions kidnap Amber and run with her into Ghoulhaven Hall. Cooper runs after them and also enters Ghoulhaven Hall.

In Chapter 1: The Rescue, when Cooper enters the Gaming Room (Scene 4), he finds Amber tied to a wooden chair at an empty fireplace; she is tied up by her arms and legs, and her mouth is covered. Just as Cooper is about to rescue Amber, the fireplace spins around, and Imps come out from the other side. Cooper later finds Amber in the Cinema (Scene 7), which is on the other side of the Gaming Room. Amber is still tied to a chair, and Cooper advises her to hop her chair away from the fireplace. However, Amber steps on a trapdoor and falls below. Cooper finds Amber in Ye Olde Archives (Scene 11), where he is first greeted by Crivens, who tells Cooper that he untied Amber from her chair. Just as the two of them are about to escape, Dr. Krackpot comes in and zaps Amber, who then turns into a Ghouly.

Amber turns from a Ghouly into her normal form

In Chapter 2: The Restoration, Cooper meets Ma Soupswill, whom Crivens told Cooper could help with a cure. Throughout the chapter, Cooper searches for three ingredients that Ma Soupswill needs to make a cure for Amber. At the end of the chapter, Cooper re-enters the Ye Olde Archives (Scene 40) with the cure. As he pours some of it onto Amber, Ma Soupswill realizes she used a wrong ingredient, and then Ghoulie Amber turns into a larger, aggressive monster. After Cooper defeats Ghoulie Amber in a boss fight, Ma Soupswill rushes into Ye Olde Archives with the correct cure and throws it onto Amber, turning her back to normal. Cooper and Amber run through the Grand Hallway, about to leave Ghoulhaven Hall, but are stopped by Mr. Ribs. He asks Cooper to rescue the remaining prisoners in Ghoulhaven Hall. Meanwhile, Amber stays with Mr. Ribs.

Amber is next seen at the end of Chapter 4: The Reckoning. After Cooper defeats Baron von Ghoul, Amber appears in the room with Mr. Ribs. She congratulates Cooper for defeating Baron von Ghoul, and the two of them hug. Amber tells Cooper to follow Mr. Ribs while she goes to tell Ma Soupswill, Babs Buffbrass and Fiddlesworth Dunfiddlin that they are free to leave Ghoulhaven Hall.

At the end of Chapter 5 and the game itself, Cooper and Amber wave goodbye to Ghoulhaven Hall's staff as both of them leave to continue their journey in Ghoulsville-in-the-Gloom. 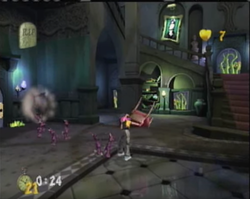 Ghoulie Amber is featured in the 11th challenge, Amber Wants a Kiss!. Although Amber's name is in the title, her usual form is not seen during the Bonus Challenge. Her normal speech icon appears at the end, when she reprimands Cooper for beating her up, and she prepares for a bubble bath and some rest to recuperate.

In the 16th challenge, Dirty Laundry!, Babs gives Amber the Soda Can Shooter, which she must use to defeat Ninja Imps in the Laundry.

In the 18th challenge, Bedtime Gory!, Amber must defeat Ghoulies in the The Baron's Quarters without defeating any Imps.

Amber is playable throughout the 21st challenge, Play it again, Son!, which is the same as the main adventure mode but with Amber as the playable character. She has 10 Energy throughout the challenge.