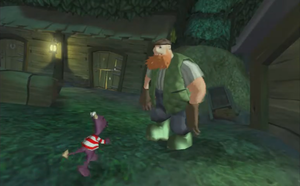 Roger the Cabin Boy is an Imp and a beloved crew member of the Zombie Pirates. He only appears in Grabbed by the Ghoulies. Roger has the same appearance as a regular Imp but wears a red and white-striped shirt and a white sailor hat. He is a close personal friend of the Zombie Pirate Captain.[1]

Roger is first seen in Chapter 1, Scene 6: Lower Corridors, behind bars to the right. He is standing on a wooden table outside the Embassy Ballroom, standing next to a dancing Zombie and an Ancient Mummy. Cooper cannot interact with Roger or the other Ghoulies behind bars.

Roger is first introduced in Chapter 2, Scene 21: Farmyard. Upon entering the area, Cooper finds Fiddlesworth being attacked by Roger. Fiddlesworth pleads for Cooper's help in taking out Roger the Cabin Boy. When Cooper does this, a Zombie Pirate jumps out from the Chicken Shed. He is angry at Cooper for killing Roger, who had only two days until retirement, and summons other Ghoulies to avenge his death.

Later, in Chapter 5, Scene 5: Dining Room, right when the Challenges start, a Zombie Pirate mentions to the other Ghoulies that Cooper did something "nasty" to Roger the Cabin Boy.