It has been requested that this article be rewritten and expanded to include more information. 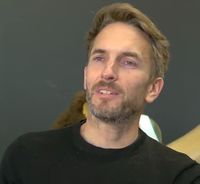 Gregg Mayles is a British video game designer employed by Rare, and the brother of Steve Mayles. He is credited as a designer for several of the company's games, such as Battletoads Arcade, Viva Piñata and the Banjo-Kazooie series. Gregg Mayles is one of the longest-serving members of the company, having worked there since 1989.[1]

Mayles was the designer of Donkey Kong Country, deciding on elements like having a sparse HUD, designing the levels to allow a skilled a player to navigate smoothly without interruption and the presence of a "buddy" character to allow the player to take more than one hit.[2] He cites Super Mario Bros. 3 as a chief inspiration for Donkey Kong Country.[3]

In 2006, Mayles started a new Banjo-Kazooie project with a new feature: car building. It was announced at X06, and was released in 2008 with the title, Banjo-Kazooie: Nuts & Bolts.[6] Mayles did work on the Xbox 360 version of Sonic and Sega All-Stars Racing and on Kinect Sports.

Gregg Mayles is the creative director of Sea of Thieves, released in 2018. One of the in-game songs is "Grogg Mayles", which is named after him.

Gregg Mayles is also known for his tweets regarding development and conceptual information of games he has worked on. This includes both Donkey Kong Country and its sequel Donkey Kong Country 2, where he would respectively use the hashtags #DKCrevealed, and #DKC2is20 in commemoration of each game's twentieth anniversary.

Gregg Mayles on other wikis: