Ashby Computers and Graphics Limited, trading as Ultimate Play the Game or simply Ultimate, was a British video game developer and publisher, founded in 1982 by Tim and Chris Stamper, their friend John Lathbury, and Carole Ward. Ultimate released a series of successful games for the ZX Spectrum, Amstrad CPC, BBC Micro, MSX and Commodore 64 computers from 1983 until its closure in 1988. Ultimate is best known for Jetpac and Sabre Wulf, each of which sold over 300,000 copies in 1983 and 1984 respectively. The company is also known for its series of isometric arcade adventures using a technique termed Filmation, starting with Knight Lore.

By the time of the label's last use in 1988 on a retrospective compilation, Ultimate had evolved into Rare, and moved on to developing titles for the Nintendo Entertainment System. In 2006, Rare revived the "Ultimate Play the Game" name for Jetpac Refuelled, an Xbox Live Arcade remake of Jetpac. In 2015, several games from Ultimate Play the Game were included on Rare Replay. 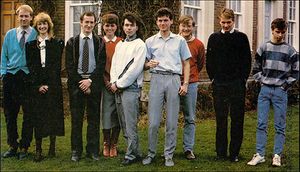 The original Ultimate Play the Game team in 1988. David Wise (middle left) was Rare's freelancer at the time.

Prior to Ultimate, Tim and Chris Stamper had worked in arcade game development. Having grown tired of making arcade games and lacking control of their creative output, the brothers formed Ashby Computers and Graphics Limited in 1982, in the Leicestershire town of Ashby-de-la-Zouch. The company was initially located in a house next to the family-run newsagent.[1][2] Other members of the Stamper family were also involved in the early running and support of Ashby Computers and Graphics Limited. The company's initial trade was in creating arcade conversion kits,[1] but would go on to develop games for home computers. The company formed a new trade name, Ultimate Play the Game, which they published their first game, Jetpac and subsequent games under. The ZX Spectrum was their platform of choice.[3] After several more critically and commercially successful releases including Atic Atac, Sabre Wulf, and Knight Lore, Ultimate Play the Game become one of the largest UK-based video game development companies.

The Stamper brothers eventually a greater opportunity in developing games for an international market. As the ZX Spectrum was only popular in the UK, the Stamper brothers believed that the platform was no longer beneficial to the company's growth as they considered it to be a "dead end". The company inspected an imported console from Japan, the Famicom, and believed that it would be an ideal future platform, as it was more sophisticated than the Spectrum, had a worldwide market, and its cartridges had no load times. As a result, Rare was established in 1985. At fist, Rare's purpose was to reverse-engineer the Famicom to learn more about its programming. With successful results, the company decided to sell the Ultimate brand to U.S. Gold and ceased game development for the ZX Spectrum in the following year.[4]

U.S. Gold continued to release games under the Ultimate label. Later titles such as Martianoids and their last game, Bubbler were not seen by the gaming press as being up to Ultimate's previously high standards and sales fell. Bubbler was the last game released, in 1987. A final Sabreman game, Mire Mare, was trailed in earlier Sabreman games and was mentioned by Sinclair User as being next up for release,[5] but was quietly dropped during development.[6]

In late 1988 Rare bought back all the rights to Ultimate Play the Game, and publications reported that Ultimate returned to game development.[7] Around the same time, Ultimate was defunct and evolved into Rare, who became a prolific developer for the Nintendo Entertainment System.

Ultimate Play the Game on other wikis: