The Rare Creative Jam, Creative Jam or Rare Jam, is an annual game jam where Rare employees showcase various small projects they manage to create in one work week. Most projects pertain to video games, but employees have also created books, board games, video trailers and even life-size sculptures. Jam projects are designed as outlets for their own creativity and are not intended for public release, although Rare highlights some of these projects.[1]

Rare Creative Jam 2015 took place in August and was the most prominent one for the company. 43 teams signed up for the competition[2] which resulted in three video games, one concept book and a fictional horror film trailer.

Hairball Heroes gameplay. Players have to watch out for the likes of tape dispenser.[3]

Hairball Heroes is a platform action game for one or more players where players navigate their round and furry mascots through an environment full of sticky sweets. Familiar Rare characters are rolled around picking up sweets they pass over and are equipped with attacks like static shocks, which can strip opponents of their stashes or even their fur. 100% + body coverage of sweets when time runs out makes one a winner. A four player demo was created in four days by five Rare employees.[4] 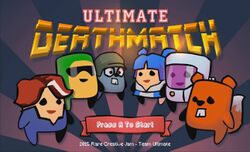 Title screen of the game, featuring the popular Rare characters.

Ultimate Death Match is a fighting platformer the likes of Super Smash Bros., except with fixed view and depleting lifebars. It is a crossover of many Rare characters, six chosen in this demo for their abilities, to duke it out and see who is the ultimate Rare character. It is played by up to 8 players through 3 rounds with changing level design. A standard base for all characters is a cute soft-edged block then customized for every character to take an uniform appearance.

Jetman and Vela were chosen for their jetpacks, Joanna Dark for jumping and shooting, Conker and Rodent throwing grenades and Rash with a tongue attack. The game was created by two employees.[5]

An untitled platformer was also showcased during the RareJam built from scratch by an UI artist. It features Sabreman, Jetman and Digger T. Rock, each with unique abilities and switchable at any moment during gameplay. Sabreman can fight off enemies with his sabre, Digger T. Rock has digging skills and Jetman can fly distances and reach high places with his jetpack.[6]

The artefact's case and a hand-made cut leather cover journal.

Art director for Sea of Thieves and Everwild Ryan Stevenson had first decided to work on a re-imagining of the classic title Sabre Wulf, but mid-way through the week changed mind, to create something tangible, pickable and prompt the audience to use their imaginations to enhance the sense of dark adventure. That being a leather-bound journal, posing as Sabreman under the pen name "Edward Saber", to tell his imagined Sabreman lore.[7] Not all pages of it have been photographed.

The journal takes place during the events of Mire Mare, the only unreleased title of the original four sequels. Sabreman has discovered the mysterious stone tablet within the jungle of Mire Mare and takes three years to study its dead language, thinking he finally cracked it. Later in the journal he writes about rhinos and hippos blocking his only routes through the jungle.

An event that takes place, something he wishes to put behind after having done, is removed from the journal, but takes consolation from finding the third part of an amulet. At the end, he decides to wait until "it truly slumbers" to retrieve the last part of the amulet. He is uncertain if the amulet will actually guide him "out of this nightmare" or whether he will succeed, but is certain that he has to try.

Chainsaw-wielding Banjo from the trailer.

NIGHTRARE is a short trailer for a non-existent horror film shared by Rare for Halloween of the same year. The trailer features a young fan who has nightly dreams about visiting his favorite studio and seeing mascots like Banjo and Joanna Dark. He discusses with a friend how excited he is to finally get a visit, but the actual event twists into a nightmare. He walks through a self-opening gate, through bushes and ends up finding Banjo, only to realize this Banjo wields a chainsaw and hunts trapped employees and their souls.

The protagonist meets and doesn't recognize an old and bearded Gregg Mayles who informs him about the evil haunting the studio. He is also terrified to find a soul of an employee who warns that he'll end up like him, if he doesn't find the heart of the studio. By the end he encounters a pirate from Sea of Thieves whom he swordfights down the building, but ends up possessed with his soul leaving the body. Gregg Mayles, the lone survivor and creator of Banjo-Kazooie, is finally found by the intimidating chainsaw-wielding Banjo.

Battletoads on an oscilloscope

Although not officially showcased by Rare, a recreation of the original Battletoads for an oscilloscope has been made by Ranulf Doswell for the 2015 Rare Jam. It was done using a PC soundcard with an oscilloscope in X-Y mode hooked up to the headphone jack.[8] 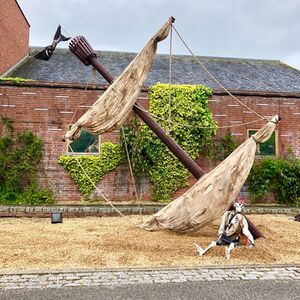 One of many statues and sculptures at Rare HQ.

Rare Jam 2019 took place in May and entries were mainly Sea of Thieves themed. Only one finished product was showcased to the public; a ship's main mast buried in sand accompanied by a pirate skeleton. This sculpture of large proportions was placed right next to Rare HQ's entrance.[9] Participants had full freedom to partake in Rare Jams in any way they choose to, including singing, baking and making game ideas.[10]