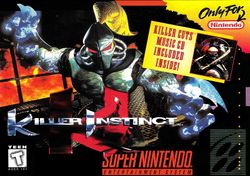 Killer Instinct is a fighting game created by Rare Ltd., and the first game in the Killer Instinct series. It was first released in 1994 for arcades and was published by Midway. After the game's release, Rare announced that it would launch in 1995 on the upcoming "Nintendo Ultra 64" home console. The console ultimately released as the Nintendo 64, but it never received a ported version of the first Killer Instinct. Instead, the game was released on the Super Nintendo Entertainment System and published by Nintendo as part of a special bundle that included a CD remix of the game's soundtrack, and a limited edition black-colored cartridge. The game also received a Game Boy version later in 1995. A digital port of the game, titled Killer Instinct Classic, was released as part of a bundle with the first season of 2013's Killer Instinct reboot on the Xbox One.

Ultratech is a very powerful megacorporation (entities which, in this future setting, replaced all governments) which organizes a tournament called Killer Instinct. Along with regular participants, experimental creatures created by Ultratech also fight in the tournament. Ultratech also discovers a technology to make bridges between dimensions, and to also release from this dimensional prison a two-headed monster called Eyedol, an ancient warrior that was locked away along with his rival.