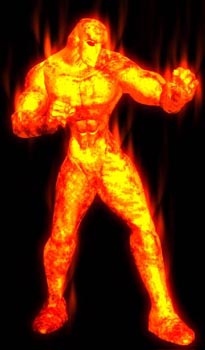 Cinder is a playable character from Killer Instinct.

Originally named Benjamin Ferris, Cinder was a convicted criminal who was subjected to experimentation by the corrupt megacorporation known as Ultratech. Upon the end of the experiments, Ben discovered that he was engulfed in a flame he could control, and he became a weapon for Ultratech.

Cinder was promised that everything would be okay if he would destroy the being called Glacius in the Killer Instinct fighting tournament. As the games progressed, the two would end up fighting each other, with the victory going to Glacius. Unfortunately for Cinder, however, he would become one of many casualties of the Killer Instinct tournament.