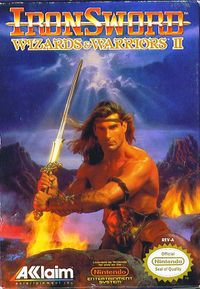 Ironsword: Wizards and Warriors II is the sequel to Wizards and Warriors for the Nintendo Entertainment System and is the second game of the series. The game was developed by Zippo Games underneath Rare, and the game first released in North America in December 1989 and January 1990 in Europe. The game continues the story of the first game and expands upon its gameplay mechanics.