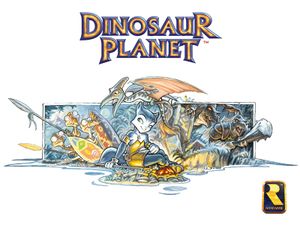 Dinosaur Planet was a cancelled game for the Nintendo 64 developed by Rareware in 1999 and 2000. Originally set for a release in late 2000, Dinosaur Planet was scrapped sometime after its unveiling at E3 2000. This was because Shigeru Miyamoto noticed the similarities between Sabre and Fox McCloud and suggested for Dinosaur Planet to become a Star Fox title.[1] After two more years of development, the game was released as a Nintendo GameCube titled Star Fox Adventures.

On February 20, 2021, a late build of the game (dated December 1, 2000) was recovered from a writable CD-R and leaked on the internet.[2] It reveals that even during the development of Dinosaur Planet, Fox McCloud was in the process of replacing Sabre.

Two of the main and playable characters were Krystal and Sabre, and their father was Randorn. Krystal is the stepsister of Sabre and the adopted daughter of Randorn.

Krystal and Sabre each had a unique role in both the story and gameplay. Both characters had their own sidekick—Krystal's sidekick was Kyte, the princess of the CloudRunner Tribe, and Sabre's sidekick was Prince Tricky, the prince of the EarthWalker Tribe. After the Queen CloudRunner died, Kyte would take over her role as queen. Although the CloudRunner and EarthWalker Tribes were peaceful, they were rival tribes. This forced Krystal and Sabre to split up during their adventure. Krystal used a sword as her weapon, and Sabre used a sword as his weapon.

There are two characters, the SwapStone Brothers, and the player can switch between either Sabre or Krystal if they visit one of the brothers.

General Scales and Drakor were two of the main antagonists of Dinosaur Planet.

Dinosaur Planet on other wikis: