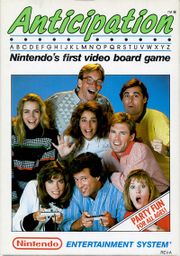 Anticipation is a video game for the Nintendo Entertainment System developed by Rare that was released in 1988. It is playable as a single player with computer-controlled players or multiplayer with support for up to four different players.

The gameplay is similar to that of a board game, like Pictionary. Either playing as a pair of women's shoes, a horn, an ice cream cone, or a Teddy bear, the game slowly draws a picture and the first person to buzz in and guess the correct answer moves forward on the game board. The number of spaces the player moves depends upon the number on the die, which counts down from 6 as the picture is drawn. Once a player correctly identifies a drawing for each of the four categories on a level, that player literally rises to the next-higher level. On the Easy and Medium difficulty levels, the first player to complete the third level wins the game. On the Hard and Very Hard difficulty levels, the first player to complete all four levels wins. The fourth level is identical to the third, except that some of the spaces are removed, and if a player lands on one of the removed spaces, the player falls back down to the third level (but the player retains credit for whatever categories the player answered while on the fourth level, and can climb back to the fourth level by correctly answering a puzzle from the remaining categories.)