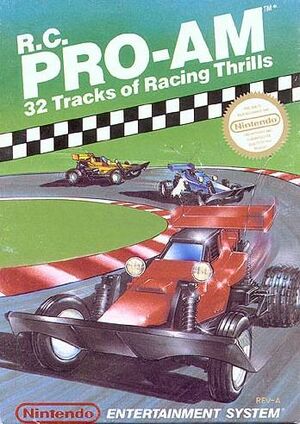 R.C. Pro-Am is a video game developed by Rare Ltd. and released for the Nintendo Entertainment System in 1988. It is a racing/vehicular combat game that puts the player not in the driver's seat, but rather on the sidelines, using a remote control to operate the R.C. Cars and thus utilizes an isometric out-of-vehicle perspective. The game's success led to the development of multiple sequels for both the NES and Game Boy platforms.

R.C. Pro-Am was a very popular game at the time, and has an impact that can still be seen today. R.C. Pro-Am was one of the first racing games to incorporate the use of weapons to temporarily disable competitors. By picking up missiles, bombs, and roll cage power-ups, the player can literally blow away the competition, at least temporarily. To add to the intensity of the gameplay, there are several roadside hazards that can stop racers. The fast and "loose" style of racing combined with the use of weapons and hazards was later replicated to much popularity in such games as Re-Volt, Mario Kart, and Rock 'N Roll Racing. R.C. Pro-Am is also the first title to add speed boost regions to parts of the track (this in contrast to nitro/boost power-ups which were available in earlier games).

R.C. Pro-Am plays very similar to early 1980's overhead racers like Super Sprint; the game is fast, has very simplified physics, and the courses have a large number of twists and turns. The difference from those titles, is that R.C. Pro-Am's game engine has much more drifting involved, as cars will glide and spin around corners. Also, only the portion of the track around the player's vehicle is displayed, as opposed to the whole entire track. The game is presented from an isometric viewpoint, giving an illusion of three dimensions. The controls are simple, with one button being used to accelerate, and the other used for either firing weapons or honking the horn. The sound is very minimal in the game, with title and game over music numbers, track and racing sound effects, and a short melody played right before each race.

There are three types of upgrades that can be collected on the course. Cars initially started with 0 points for each statistic, with the level increasing with each pickup to a maximum of four. In addition, picking up any of these power-ups results in a quick instant burst of speed. These enhancements can NOT be acquired by the computer-controlled cars:

The attack weapons in R.C. Pro-Am are missiles and bombs. Each time you drive over a missile or bomb icon, you gain five rounds and the weapon available (all of the ammo you have already collected) changes to that type.

Missiles are used to attack opponent cars ahead of you, allowing you to pass them while they are disabled. Bombs are shot out of the rear of the vehicle, allowing you to stop an opponent vehicle from accelerating past you.

Collecting stars on the track increases your stockpile maximum by one (in addition to awarding 100 points) while collecting skull icons decreases it by one. Computer players could NOT fight back or collect these items.

In addition, running over an icon resembling a roll cage places a shield around whichever player (including computer-controlled ones) that collected it. This power-up can also be a weapon; contact with a shield-equipped player causes a spin-out and possible destruction. The shield can be destroyed through conventional weapons. This one CAN be collected by the computer players.

On every course is a glowing letter that the player can collect which corresponds to one of the eight letters in "NINTENDO". Once all the letters have been collected, which at the earliest can happen every eight levels, the player's car is upgraded. From the initial pick-up truck, the player upgrades to a sports van. The third, and final upgrade, is a race car. The process of upgrading resets all car upgrade counters to zero; however, it is believed that the actual performance gain is retained.

After the 2nd loop, the computers will rapidly become faster. By track 29, all three computers will attain 127 mph immediately, requiring the player to constantly destroy at least one car during the race or lose the game.

There are four types of track obstacles that appear in fixed locations on each track. Their impact ranges from a temporarily slow-down to temporary destruction.

In addition there are ">>>" decorated parts of the track called "zippers" that act as an instant boost whenever a vehicle runs over them. They are scattered across many of the tracks, especially in later levels. Much of the challenge in the game, especially in later levels, revolves around ensuring to hit every zipper, to ensure top speed. R.C. Pro-Am is the first racing video game to ever have a speed boost sections of the track. This would be later be duplicated in many games, including F-Zero and Wipeout 2097.

As soon as the first place car crosses the finish line, the race is stopped immediately and runner-up positions are determined by the vehicles' relative order at that moment. If the player does not finish in at least third place, then a state of game over is reached, where the player has the option to use one of three continues.

Between each level the trophy room is displayed, showing the addition of the trophy earned for the just-completed race. Also, at the top of the screen, is an "overall" ranking trophy, which signifies the place on the high score table. The large trophies will start with a "6", counting down to eventually a large championship trophy like the one pictured.

There are approximately twelve different track layouts in R.C. Pro-Am; level layouts are repeated indefinitely, but add more zippers and hazards as the level increases. It is believed that the game has no end — there are accounts of people who have played with the use of an aid tool (such as the Game Genie) specifically to determine if there is a last level. However, the 24th level could be understood as the "last" level because it is the largest track and has the most number of laps (9 laps); then after the 24th level, the 25th level is actually the same as the first just as the 26th is the same as the second, indicating that after Level 24, the level sequence starts over. Thus far, players have gone past the 200th level mark with no end in sight.  (The last statement needs a picture since the trophy screen could not fit 200 trophies on it, could it?)

The game R.C. Grand Prix for the Sega Master System is very similar to R.C. Pro-Am and was developed as a more realistic response or clone, created to try to replicate the popularity of R.C. Pro-Am. Developers Rare eventually created a kart-style racing game, which took the gameplay elements founded in R.C. Pro-AM, called Diddy Kong Racing for the Nintendo 64.

The game was later included in the compilation Rare Replay.