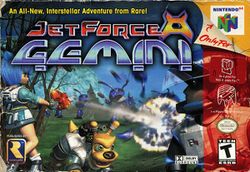 Jet Force Gemini is a Nintendo 64 third-person shooter developed and published by Rare in 1999. It was created by the same Rare team that developed Blast Corps. Jet Force Gemini introduces a few elements that have never been seen on the Nintendo 64, such as a no split-screen co-operative mode and a control scheme that features two ways to play the game. Jet Force Gemini shares elements with platformers, action-adventure, and run and gun games.

Players assume the role of three members of Jet Force Gemini, the last remaining group of the once proud and strong military organization Jet Force. The main story arc encompasses the trio's quest as they try to stop the advances of the dark insect tyrant Mizar and his near limitless army. Throughout the game, the player will also have to collect several spaceship parts and save a large number of Tribals, a group of survivors who have been enslaved and imprisoned by Mizar.

Reviews were generally positive towards the game, though not as high as Rare's other N64 games such as GoldenEye 007 and Banjo-Kazooie. Praise was given to its graphics, sound and originality, while criticism was leveled at the game's difficult controls and insistence on having to save every Tribal to fully complete the game. Jet Force Gemini is frequently regarded as one of the most innovative and original games of its era.