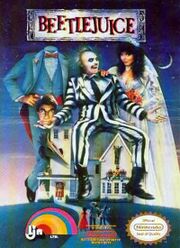 Beetlejuice is an video game developed by Rare Ltd. and published by LJN in 1991 for the Nintendo Entertainment System. Based on Michael Keaton's 1988 movie of the same name, the player takes on the role of Beetlejuice, a ghoul who is hired by a recently deceased couple, through various side-scrolling and overhead view to scare away the new occupants of their old home, the Deetz family and friends. To that end, the player must guide Beetlejuice through the house to collect "scare points", while avoiding hazards such as lasers and burning torches.