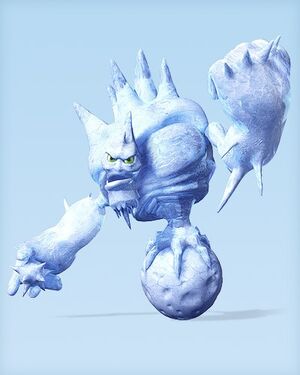 40 Below is an Elemental Warrior that appears in Kameo: Elements of Power.

The Queen of the Thirteenth Age, though blessed with kindness, was fated to take the throne for but a few years before her bod succumbed to the ravages of illness. In her brief reign she was credited with many good deeds, the most noble of which saw her venture out alone in a snowstorm. Whilst attending a summit in a tribal village, the queen overheard the distressed mutterings of the child's family, and would hear no argument- she braved the ravaging weather with her Elemental Warriors and returned triumphantly with the child held safe in her arms. In gratitude, the villagers revealed to hear a long-held secret... an Elemental Sprite which they had safeguarded through the generations. This sprite was, in fact, 40 Below - the warrior whose magic kept the ice at bay in spring and ensured a cleansing winter.