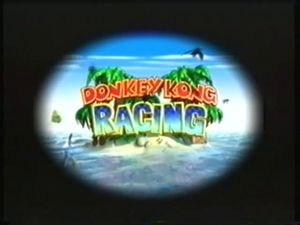 Donkey Kong Racing is an unreleased Nintendo GameCube game of the Donkey Kong series, intended as a sequel to Diddy Kong Racing. The game was first revealed at E3 2001, as a full-motion video trailer, and It was developed by Rare and was slated for a release in 2002.[1] Due to Microsoft's acquisition of Rare, who lost the right to develop Donkey Kong games, the game was being reworked into Sabreman Stampede, but the game ended up being cancelled entirely.

Most details about the game are unknown. The main mechanic was that the Kongs (and Taj, who was also in the trailer) would ride Animal Friends as "vehicles", with varying colors and sizes.